Oh, what a brilliant idea. All countries in the world should do this! Crossing paws that the proposal gets accepted, or whatever the word is for that kind of thing

I’ve recently shared the last update on the story of Claudia the Cat.
Now it’s time to make a difference for another little darling. Meet Mini. Please, please SHARE and donate if you can. We already did. Every dollar counts. Even if all you can spare is $1. Imagine if all of us donate $1 today. Can we get a thousand people donating one dollar? I know times are tight for everyone. I understand, even if I am a cat and not a human.
So if you can’t donate, then please share. Let’s help Mini get the life she deserves! Just think, how wonderful it will be when she too finds a forever home!

She is one of the millions of stray cats roaming free in the streets of İstanbul , her mother , an unknown soul to us, is probably one of the most skilled felines of the city …

She has to be ; surviving in the big metropolitan city with only your bare minimum needs met is not an easy task when you channel most of your energy into protecting your baby.
It is not always possible though.

Often , if it is not a car that takes your most precious away , it is the human cruelty.

Mini’s story started just like many others,the moment she fell apart from her mother , she became a prey to the dangers of the world…
A world mostly dominated by human race,thus a world where the rules are set by them.
The first 4 months of her life was not that bad …

This story has a very sad, angering start but a very happy ending.

It happened in a country far, far away from mine. It is called Turkey and one of my human’s best friends since decades before I was born is currently living there.

One day, my human got an urgent message from her friend. There was a small cat around her house and it looked to be in distress. My human’s friend -while being a cat lover, had never cared for cats because she’s allergic.

My human tells me that when they were in school together, her friend would come to visit or to study and she would play with the cats. My human always had the allergy medication ready cause her eyes would start watering and she would start sniffling in less than 30 minutes!

Anyway, the friend was very worried. She put some food and water out but she could tell there was something very wrong with the cat. My human told her to try and trap the cat to take it to the vet. It turned out the cat didn’t need any trapping. As soon as the friend went out the house, the poor thing came running towards her like saying “please help me”

Now be strong. This is one of the first pictures the friend was able to take

As it turned out, Lola’s tail was all burned. No clue on how that happened but the friend has the suspicion that some of the village’s kids did it. Apparently the cat -who at this point didn’t even have a name, would get really upset whenever there were little humans around.

The friend took the cat to the vet and they tried to preserve the tail. The friend said the vet cleaned the burns (I shudder to think of the pain) and they were sent home with no pain medication. Can you believe that? My human was angry when she heard! The poor cat wasn’t given any pain medication whatsoever *HISSS*

But! the friend was told the little cat was a female and about 6 or 7 months old.

When the friend took her back to the vet for the control appointment, it was clear that the tail had to be amputated.

At this point, my human’s friend was determined to adopt the kitty and do everything she could to bring her back to health. She named her Lola Sincola (Tailess Lola). She gave permission for the surgery and sat crossing fingers and toes that everything went well.

Lola came out of surgery just fine and in no time, she was eating well and running around like a healthy kitten should do.

You can see how happy Little Lola is now.

Cuddling with the human

The tree in Lola’s backyard, which she loves to climb

Sunbathing by the window

Feel free to click on the pictures to see the bigger versions.

Lola Sincola is well taken cared of and absolutely adored by my human’s friend. She’s even had already her spay surgery and she wakes her human up every morning by licking her face and sending her running to the bathroom to take the allergy medicine 🙂

Disclaimer: Story and photographs used with permission of Lola’s human. All copyright belongs to her! Please do not use without permission (I really should learn how to make those watermark thingies)

No, not my human. The other Claudia. Claudia the Cat.

I meant to tell you the good news a long time ago but I forgot.

I’m very happy to report that Claudia has a home now, with a loving human and a brother cat!!! 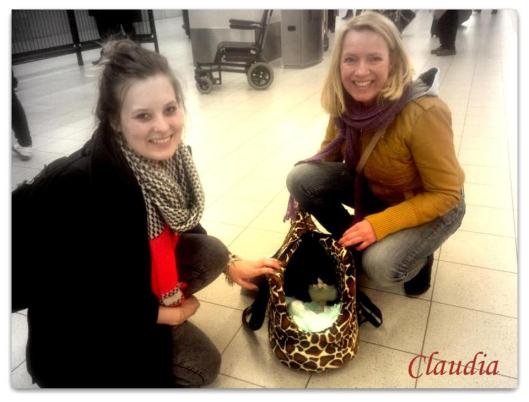 Claudia, at her arrival in Holland, with Anita, her new human

Take a look at Claudia’s brother. His name is Jimmy:

A million thanks to the people over at the He’Art of Rescue for all you did for Claudia and all you have done and continue to do for so many other doggies and kitties in need.

You have my admiration and respect. 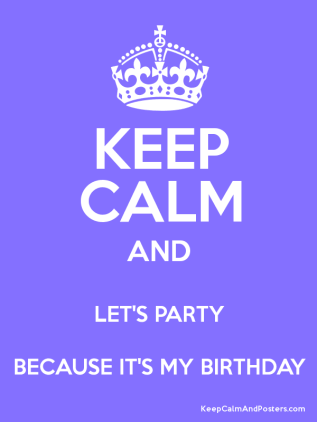 Actually, we’ll party on our – Satchie and I, Gotcha Day next month but we can still celebrate a little today, right?

I am ten now. And still a bachelor. But who has time for ladycat friends when one has to take care of the tornado that is the kid? I have to be responsible, you know?

And now, because you asked for it, here’s a picture of me when I was a young fella.

Me and my first cat dancer. Loved that toy. And now, it’s the kid’s favourite too

I was five months old in that one. Sadly, there aren’t any pictures of me at a younger age.

So, there you go. Hope you all had a good week. It’s Friday! Time to relax and spend time with the love ones.

Imagine that. The kid is one year old now!

Or at least around that day, anyway. That’s what the nice lady vet said.

We’ll celebrate my Gotcha Day instead but I figured today was as good a day as any to check in and say hello.

We haven’t forgotten about all of you.

Both Jay and I are doing well.

It will be Jay’s B-day (as calculated by his vet back when he adopted mom) in 4 days. Mom can’t remember his Gotcha Day. Silly mom. She says it was either end of May or beginning of June. Definitely before her birthday. Mom says Jay was very young but not as young as I was when she found me.

Either way, we’ll have a BIG Gotcha Day party next month!

I’m also sending a big happy B-Day headbutt to Milton the Cat, who was born on April 15. Purrs to you from all of us… 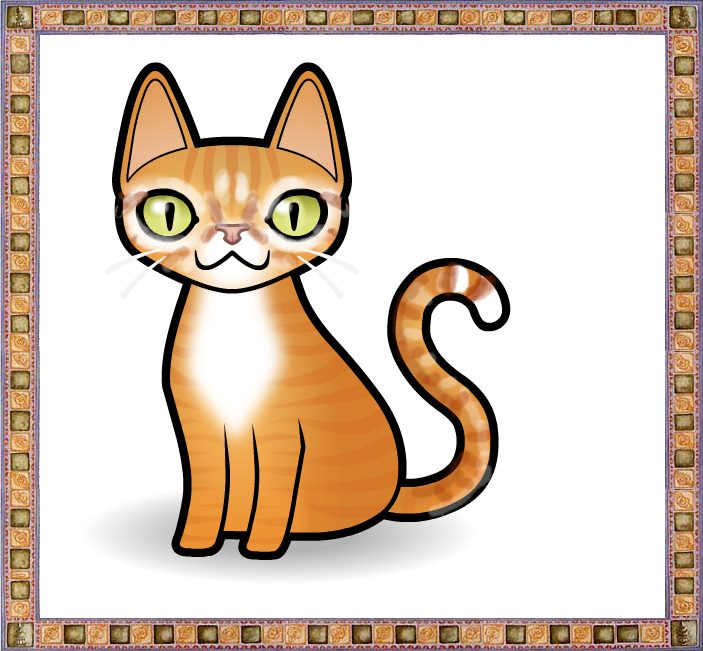